Most utilities in the public space struggle to consistently generate free cash flow from operations. This means that they typically spend more cash than they generate in sales. Whether they spend it through typical yearly expenses or in capital expenditures designed to generate higher future cash, most utilities struggle to put cash in the bank year over year. To make up the difference, these companies can either raise cheap debt with help from the government or issue stock. For most publicly traded companies, this would be catastrophic to the stock price if the cash flow margin is never achieved. However, for regulated utilities, they can consistently raise debt and equity to pay for major projects as long as they have the political support from the state and federal government, making the negative cash flow margin sustainable for long periods of time.

Next Era Energy (NYSE: NEE) is one of the exceptions. Since 2012, Next Era has generated positive free cash flow, enough to cover the dividend, up to the end of 2017. This has allowed Next Era to maintain a superior balance sheet relative to peers. By almost every measurement, Next Era has lower debt relative to equity and cash generated from operations than Southern Company, Dominion Energy, Duke Energy, and other peers. Most importantly, Next Era consistently generates more cash on its invested capital than the cost of capital used to fund the project (which is a great sign).

There are some red flags, however. The purchase of Gulf Power increased debt on the balance sheet and the cash generated from that purchase hasn’t yet materialized. Usually, the integration of new assets takes a year before analysts can start seeing financial results but it’s worth monitoring. Next Era has also increased capital expenditures for 2019, driving free cash flow negative. The bulk of capital expenditures for 2019 appear to be investments in wind power. Because the free cash flow is negative, Next Era raised $1.5B of stock and issued $7.5B of debt. Time will tell if Next Era can make up the gap. Based on their history, I have no reason to believe that these capital projects will not be strong generators of future cash flow.

The strong execution of capital deployment does come with a price. A high stock price to be exact. NEE stock trades at a much lower dividend yield than Southern, Duke, and Dominion. Their price-to-earnings ratio is also significantly higher at 25.8x rather than 19.5x industry average. This means that it would hypothetically take over 25 years of earnings to pay off the price of the stock, holding all else equal. This is expensive for a utility as even the best-run utility is going to be a low growth company.

Overall, Next Era appears to be a well-run company with a management team that is very disciplined with its capital spending. Leverage at Next Era is low compared to other peers. But investors will pay a higher price for the safety of the low leverage. This has driven valuations up and makes Next Era stock one of the most expensive utilities an investor can buy. 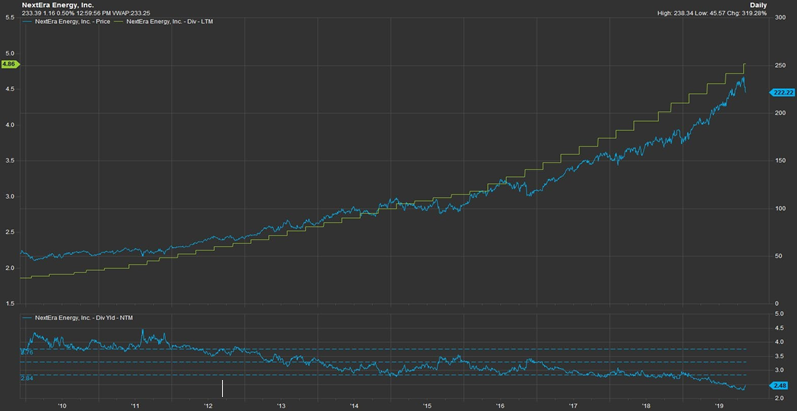 This material is for informational or educational purposes only.

Investing involves risk including the potential loss of principal. No investment strategy can guarantee a profit or protect against loss in periods of declining values.

Opinions expressed are subject to change without notice and are not intended as investment advice or to predict future performance. Past performance does not guarantee future results.